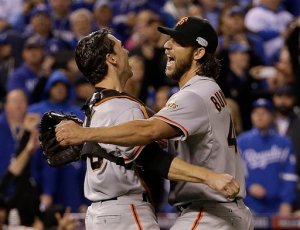 It’s bad enough that Game 7 of the 2014 World Series is followed by Halloween for the folks in Kansas City. Royals fans are likely to wake up in the middle of the night screaming, haunted by the dominance of MadBum the Great, who led the Giants to a 3-2 win and their third championship in five years. But now, there is one more reason for those who proudly wear the Royals blue to have nightmares. It’s the realization that the Royals passed up on the chance to select MadBum the Great in the 2007 MLB draft where they had the second pick. The Royals instead chose Mike Moustakas. The “Moose,” as he is affectionately called in Kansas City, did well overall in this post season, slugging five home runs. But he did not become a World Series legend, and quietly went 0-for-3 in Game 7. It’s not like the Royals didn’t know about MadBum the Great before the draft. A scouting report on him at the time said of Madison Bumgarner, “He certainly looks the part with the body type and fastball of a professional pitcher. Lefties from the high school ranks with plus velocity like that don’t come around very often.”

The Royals scouts shouldn’t take it too hard, since eight other teams also passed him up, leaving MadBum the Great as the 10th selection of the Giants. He was in the majors in two years, making his debut on Sept. 8, 2009, as a replacement for an ailing Tim Lincecum. Today, MadBum the Great sits at the top of the baseball world, putting his name next to the pitching elite in the game’s history.

All hands on deck: That’s what we kept hearing from Giants manager Bruce Bochy, but it turns out it was a sham. Game 7 didn’t become a bullpen game as advertised. It became a Bumpen game. Pitch count? That’s so the 2014 regular season. Bumgarner threw 117 pitches in shutting down the Royals in Game 5. In Game 7, on two days rest, he threw 68 pitches in relief  while blanking the Royals on two hits. Overall, he pitched 21 innings in the World Series, allowing one run, while striking out 17 and walking one. Starter Tim Hudson only recorded five outs in quickly blowing a 2-0 lead, and reliever Jeremy Affeldt came on to keep the Royals quiet through four innings, extending his post-season scoreless streak to 22 innings. Bumgarner’s appearance in the fifth was largely seen at best as a bridge that might get to the back end of the Giants bullpen in the seventh. But those pitchers became awed spectators like the rest of us as we saw Bumgarner do his bulldog impression that reminded us of legendary durable performances by such names as Christy Mathewson, Walter Johnson, Sandy Koufax and Bob Gibson.

Defense, Defense! They don’t yell that chant at baseball games, but perhaps fans should start doing so at AT&T Park because it was the glove work  that had a lot to do with the Game 7 glory. In the second, with Affeldt trying to limit the damage, Nori Aoki hit a higher chopper that came down at second base just as runner Alcides Escobar was sliding into the bag. Shortstop Brandon Crawford timed it perfectly and grabbed the ball while simultaneously stepping on the bag for the inning-ending force. Eric Hosmer roasted a shot to Joe Panik’s right which appeared to be a sure hit. Panik speared the ball with a dive, and flipped the ball from his glove to Crawford who turned the double play. In Bumgarner’s first inning, Aoki hit a twisting liner down the left field line that Juan Perez snared on the run.

Hits over-rated: The Giants continued their trademark of bringing runs home without hits by scoring their first two on sacrifice flies by Michael Morse and Crawford. Morse drove in what would turn out to be the winning run in the fourth with a base hit that scored Pablo Sandoval.

Speed bump: Much of the pre-Series hype focused on the Royals speed. Would Giants pitchers be able to keep their runners from getting big jumps, and could Buster Posey throw them out? Most conceded this would be a mismatch in favor of the Royals. So how did it work out? The Giants and Royals tied with one stolen base in two tries. The other storyline concerned the Big Three in the Royals bullpen. They allowed just two earned runs in 14-2/3 innings, so they did their job. But, it’s the way baseball goes that the only reliever anyone will remember from this Series is Bumgarner.

MVP: Bumgarner, who won the NLCS MVP, was the obvious World Series MVP, but Hunter Pence and Sandoval deserved honorable mention. Pence was 12 for 27, a .444 average, with seven runs and five RBI. Sandoval was 12 for 28, a .429 average with six runs and four RBI. Crawford hit .304 and Brandon Belt .303. Speaking of MVP, when the Dodgers Clayton Kershaw is likely awarded the National League MVP trophy, won’t that ceremony now seem very hollow after Bumgarner might have just grabbed the unofficial title as the game’s greatest pitcher?

Panda’s farewell? If Sandoval ends up elsewhere in free agency, his final image as a Giant will be cherished forever. As he grabbed the popup for the final out he flopped down on his back for a couple seconds as celebrating teammates ran onto the field. While the Giants are figuring out whether they can pay the Panda, should Bumgarner get a raise? He is on a five-year, $35 million contract, and was paid $3.75 million this year. Can you imagine how much he could demand if he was a free agent now? The Giants shrewd move in locking up Bumgarner until 2020 might be one of the greatest front office signings in sports today.

Title tracker: So, that means the Giants franchise now has eight World Series titles and the Dodgers franchise has six. The Dodgers haven’t won one since 1988, the year before Bumgarner was born.

The skipper: One of the fun parts about following baseball is to second guess the manager, as the fans and press like to do, over decisions such as bunt or hit away, the batting order, pitching changes and such. Giants manager Bruce Bochy is taking all the fun out of this, because he’s mostly right and we’re mostly wrong. Bochy’s third World Series win makes him a Hall of Fame lock, and it will be hard to find fans or media who will second-guess voters on that.

Mr. President: This means the Giants will be meeting at the White House again with President Obama. Last time they were there Obama announced the Giants plans to establish a garden at the ballpark where there would be fresh-picked greens, vegetables and fruit at the site just beyond center field. Both Obama and the health-diet devotee Hunter Pence were featured on a video about the garden. I can’t wait for the moment when the assembled players stand at attention while Obama walks in the room while Pence leads the White House band in a greeting of “Kale to the Chief.”

By joekonte in Uncategorized on October 30, 2014.
← World Series #6: A Giant Loss of Biblical Proportions Giants Aren’t a Dynasty — Yet →