Giants Aren’t a Dynasty — Yet 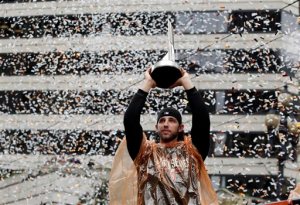 I hate to rain on the Giants parade, but there’s not enough sound evidence to call them a dynasty. Not that they or their fans care, because it actually did rain on their parade, and about a zillion people showed up anyway to soak in their third World Series championship in five years. The faithful would just as soon whack me with a soggy umbrella than hear reasons why it’s not a dynasty yet, but such debates are one of the big reasons many cherish the game.

I embarked on this mission as a serious researcher, but I began by creating this simple test about whether the Giants qualify as a dynasty: If it looks like a duck, walks like a duck and quacks like a duck, then it must be a duck. So I Googled this theory and ended up with a bunch of articles about Duck Dynasty. Now, I have never seen the popular reality TV show, but I am aware that some of the characters have beards longer than many major league players, which is quite impressive right there. I quickly discovered that the Duck family made its money by producing things like duck calls for hunters. It got me to wondering whether their family made those duck calls that Dodgers fans brought to a game in 1962 in response to the Giants flooding the infield to stop the Dodger speedsters. Probably not. I also learned that ratings for the Duck Dynasty are finally slipping after three years, so this show may be heading for the designation of Lame Duck Dynasty.

The last National League team to win three championships in five years was the St. Louis Cardinals in 1942-44-46. That club, led by Hall of Fame legend Stan Musial, isn’t even on anyone’s dynasty list. The numbers show that if those Cardinals didn’t achieve dynasty status, the Giants don’t have much of an argument to make for themselves. In six seasons, from 1941 through 1946, the Cardinals won four pennants and finished second twice. They went to the World Series four times in that period, dropping the 1943 Series to the Yankees. They won 106 games in 1942, and 105 games each  in 1943 and 1944.

Merriam/Webster defines a dynasty as “a family, team, etc. that is very powerful or successful for a long period of time.” The Imperial House of Japan is used as an example of a dynasty because it has been around since 660 BC. The Holy Roman Empire is another that gets mention because it held on for 2,214 years. The Giants are going to need to build a far deeper farm system if they expect to be mentioned in the same breath as those two powerhouses.

So how high is the bar to reach dynasty status? The Yankees of 1949-1964 won 14 pennants and nine World Series championships in 15 years. The Yankees of 1996-2003 reached the post season all eight years, winning seven division titles, six pennants and four World Series crowns.  The Big Orange Machine might have passed the Big Red Machine this year. The Cincinnati Reds of the 1970s dominated over six years, but only won two World Series titles. The A’s get dynasty consideration because they won three consecutive World Series, while winning their division during the five-year stretch from 1971-1975.

The Boston Celtics established themselves as a dynasty by winning 11 NBA championships in 13 years from 1957 to 1969. The Los Angeles Lakers won five championships in a 12-year-run from 1979-1991, which included nine conference titles and 12 winning seasons. The Chicago Bulls won six titles in eight years from 1993 to 1998. Those sound like dynasties.

The UCLA basketball team from 1964-1975 is arguably the top all-time sports dynasty with 10 national championships in 12 seasons, including seven straight from 1967-1973, four undefeated seasons and a stretch of 88 consecutive wins.

Lance Armstrong appeared to have claimed the individual designation with his seven consecutive Tour de France titles, but his reputation has faded quickly from dynasty top die-nasty.

The Giants players aren’t the only ones facing tough competition to earn widespread dynasty acceptance. Lou Seal, their mascot and cheerleader, has given his all to rally the team and fans. But before he can become a dynasty mascot, he must surpass the hurdle of the Morehead State University coed cheerleading squad, which has won 19 titles in 22 years of sideline rooting.

But so much for the numbers.

Dynasties are usually feared and favored. For example, in their heyday, the Celtics, the 49ers and the Roman Empire were expected to push around the opposition in every battle. The Giants, meanwhile, get about as much respect as Rodney Dangerfield. It might be that in the era where finances and parity are changing the competition, a three-out-of-five post season domination is as spectacular and noteworthy as the traditional dynasties of years gone by, and we should all simply recognize and salute that. Those three World Series rings offer sufficient consolation if the Giants aren’t deemed to have reached the dynasty pinnacle, and the players who have been around for all of them are still thinking they’ve got enough fingers for seven more. Is anybody really prepared to make the case that this club won’t eventually be fitted to someday clearly wear the dynasty label?