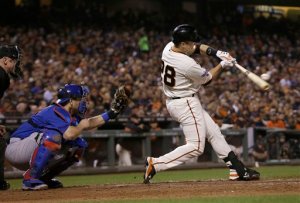 When the Giants first came out west in 1958, my Dad took me to San Francisco International Airport to greet the players as they got off their airplane following a road trip. The players, some carrying their own luggage, would actually walk right by the fans, separated by only a thin strand of rope. I would lean against the rope with other fans, and hope that some Giants would stop long enough to sign my baseball. Some did, some didn’t. When the last player had walked through, my Dad would check out the ball and we would examine it to see what signatures I got. I still have the ball today, and it’s still a treasure, not just because of the names, but because of the fun we had seeing the players up close. A number of players didn’t sign the ball, choosing to move quickly from the plane to their cars and go home. Me and my Dad never thought to hold it against them, and cheered just as hard for those whose names weren’t on my ball as those who stopped the next time I was at the ballpark. I was thinking about this experience the last couple days after reading a hit piece on beloved Giants catcher Buster Posey by a New York Times political reporter.

Usually the NYT reserves such distaste in its pages for those committing high crimes and misdemeanors. So what impeachable offense was Posey being accused of? Don’t laugh. Posey had made the error of his career: He didn’t sign an autograph for the kid of NYT reporter Eric Lichtblau. Lichtblau has a Pulitzer and a couple of books, one on George W. Bush. Posey has three World Series rings. Fair fight, except Lichtblau has a lot of ink and a worldwide web page to publish his ramblings. So I feel obliged to step in and sort this out.

The NYT vs Buster Posey saga began when Lichtblau chose to write about a five-city, eight-game trip he took with his sons. The itinerary included two Giants-Cubs games in Chicago. Lichtblau said his 12-year-old son Andrew loves Buster, and wore his Posey jersey, Giants cap and carried an orange sign reading “Posey for Prez.” (Fact check: Lichtblau admits that when they saw the Pirates, his son was proudly wearing a T-shirt of Pittsburgh star Andrew McCutchen, so this loyalty to Posey is suspicious.) The goal after the Cubs-Giants  game was to get an autograph, and Lichtblau, being an investigative reporter with inside sources, was told of a “hideaway in the stadium where I heard visiting players sometimes emerged after showering to catch the bus.” The autograph ambush was set.  Lichtblau said a few players, including Madison Bumgarner, stopped to sign, but that Posey kept walking despite pleas from Andrew. What Posey would have seen was Andrew standing there with his father right behind him holding up the sign over the kid’s head. To Posey, or anyone else, this wouldn’t have been a scene of a cute kid wanting a signing — it was of a goofball father orchestrating the whole thing. Lichtblau’s desperation to get a Posey autograph was now bordering on unhealthy obsession, as he brought his son back to try again the next night. Again, Posey, to his credit, kept walking. Andrew then stuffed the sign into the garbage. Wrote Lichtblau: “Somewhere amid the trash was a life lesson for a crushed 12-year-old about the way heroes can disappoint us.”

How about a get-real conversation with Andrew that the ability to hit a ball, catch a pass or make a basket doesn’t make someone a hero. Instead of a baseball trip, take him to see volunteers who feed the homeless and comfort the sick, visit a fire station to meet firefighters who risk all to save life and property, or attend a Memorial Day service to honor those who have given everything. My understanding is that Posey works closely on community causes, but he doesn’t carry a sign around publicizing it. So maybe Andrew can learn that Posey really is a hero in matters that truly count. And assuming Andrew plays little league, there can be no better example of how to play and honor the game correctly. Posey plays hard, but respects the opposition, runs out homers with head down, and doesn’t go through a variety of gestures like his peers after simply getting a base hit.

Lichtblau would be the last guy I’d want to go to a game with. Geez, he’s taking his kids to a bunch of ballgames, but the joy seems to be ruined by his downbeat attitude. He worries that the innocence of the game has been lost, and that his kids are jaded by the problems of the sport. Gee, I wonder where they got that from?

But why pick on Posey, I asked myself. Then I checked his bio and discovered that Lichtblau worked for the Los Angeles Times for 15 years. So is this a case of an LA guy, a possible Dodger fan, passing judgment on a star Giant? Are you kidding me? Lichtblau seems so stressed — over baseball for gawd sakes — that I am willing to take pity on him. Whatever ails him, I recommend there is no better cure than a Buster Hug.

Meanwhile, I would suggest that Lichtblau stick with his obvious high skills in writing about “43” and ease up on No.  “28.”

By joekonte in Uncategorized on September 3, 2015.
← Rugger, DiMaggio and the Sandlots of San Francisco Why Giants, Not Dodgers Have All The Rings →