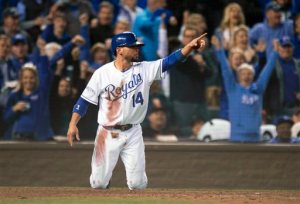 The Giants approached Game 6 of the World Series like a bunch of heretics. None of them could see the Second Coming. But by the time the 34-minute second inning had come and gone, the Kansas City Royals had staged an outburst of Biblical proportions, scoring a stunning seven times on the way to a 10-0 trouncing to force a deciding Game 7. And despite what the Bible tells us, nobody is going to rest on the seventh day.

That apparently includes Madison Bumgarner, the most interesting man in the World Series. Stay off the bases, my friend. Fans caught up in MadBum-mania were pushing for him to follow up his 117-pitch gem in Game 5 by starting Games 6 and 7 if necessary, bat cleanup, hit a couple of grand slams, take a few months off, and then pitch all 162-games next year. At least it seemed that way. Manager Bruce Bochy, with a proven Hall of Fame type mastery in handling pitchers, will be tested in how he goes to Bumgarner in Game 7. It doesn’t seem realistic that the Giants ace would pitch more than two innings in relief, but when those would come is uncertain. Early in the game if starter Tim Hudson falters? The sixth and seventh if the Giants need to hold down the Royals?  As the closer? But the Giants can’t assume that Bumgarner in this unusual two days rest situation would pitch with the same dominance he has shown during the post season.

The anticipation of what Bumgarner might do is nearly irrelevant if Hudson lets things get away like starter Jake Peavy did in Game 6. Peavy was on a short leash, but you wonder whether they should have ever taken him outside to begin with. He has not been ready for a prime time start in either of his World Series appearances. The Royals went to work on him in the second with singles by Alex Gordon and Salvador Perez. A crucial play in the inning came with runners on second and third with one out. Alcides Escobar rolled a ball to the right of the pitching mound. First baseman Brandon Belt ran to field the ball, second baseman Joe Panik ran to cover first, while Peavy pointed to the plate as if the runner was breaking for home. Belt got ready to throw home until he realized the runner wasn’t coming, and then had to spin back to try to beat the batter to first. Peavy was the air traffic controller on this play and he had three planes landing on the same runway. As taught in Spring Training 101, he should have ran immediately to cover first at the crack of the bat.  His confusing and poor directions to Belt had the Giants first baseman staggering around so much I thought security would demand a breathalyzer be taken.

That bizarre scene on the bases reminded me of a song performed by the legendary Danny Kaye during the 1962 Giants-Dodgers pennant race. Kaye linked Giants pitcher Stu Miller, second baseman Chuck Hiller, catcher Tom Haller, first baseman Orlando Cepeda , Dodger batter Maury Wills and umpire Jocko Conlan to a similarly awkward play. “Maury bunts. Cepeda runs to field the ball and Hiller covers first, Haller runs to back up Hiller, Hiller crashes into Miller, Miller falls, drops the ball, Conlan calls safe.” The inning got worse from there. The Giants tried to spin it that Peavy was just getting bad breaks, but the fact is the Royals were getting some real comfortable swings against him that paid off in the seven-run second. The Giants pitching woes in this game might have been moot anyway. The Royals 23-year-old rookie Yordano Ventura was superb, shutting out the Giants for seven innings on three hits.

Game for the ages: Hudson, 39, will be the oldest pitcher to start a Game 7 of the World Series. The Giants will probably be happy with four solid innings. The Game 6 rout means both teams have their late-inning bullpens ready, setting the stage for a fascinating number of key pitcher-batter battles. The blowout allowed the Giants to use ineffective relievers Jean Machi and Hunter Strickland while saving the best for the last game. Left-handed hitter Mike Moustakis drilled his fifth home run of the post season off Strickland in the seventh. It was the sixth big fly against Strickland in 8-1/3 innings of the post season. It’s still not clear why Bochy has stuck with the inexperienced Strickland on the biggest baseball stage. It’s been like teaching someone to drive during the Indy 500.

MVP: The Royals could win Game 7 and not have a legitimate MVP candidate. Right now, it’s between Bumgarner and Hunter Pence. Pence leads both teams in average (.435), hits (10), runs (6) and RBI (5). Bumgarner’s two sterling starts make him a contender, and he might seal the deal if he comes in late to shut down the Royals in relief.

Game 7: There is no more dramatic game in sports. The end of a long, grueling season comes down to one game. My first experience of a Game 7 came in the 1962 World Series between the Giants and the Yankees. My Dad and I took the bus to the game to avoid parking and traffic hassles. The Giants hadn’t won a World Series since 1954 in New York, and now had a chance to win their first championship in San Francisco. The outcome is well known, as Willie McCovey lined out to Yankees second baseman Bobby Richardson for the final out with the tying and winning runs at second and third. What I still remember from that day was the bus ride home. It was so quiet, it was so sad. Fifty-six years later, in 2010, the Giants finally won a World Series. As friends were noisily celebrating inside my place, I took a minute to go outside on the deck with my glass of champagne, and I silently raised a toast to my fellow fans who were on the bus that deeply disappointing day in 1962. I knew that time meant that a number of those on the bus had passed on, including my Dad, but that others who were kids like me at the time were partying elsewhere right now. A friend came out and said  “what are you doing out here all alone when everyone is inside partying?” I didn’t know how to tell him that I wasn’t alone, that for a few sweet moments I was back on that bus, but that this time we were turning onto 3rd and King, and being showered with confetti as we passed the Giants ballpark. Game 7 memories. Which ones will we take with us from tonight?