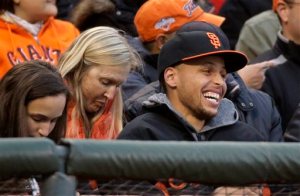 Golden State Warriors guard Stephen Curry laughs while being introduced during the second inning of baseball game between the San Francisco Giants and the Atlanta Braves on Friday, May 29, 2015, in San Francisco. (AP Photo/Eric Risberg)

June never looked so good. This is the month the Giants are supposed to swoon, yet they are in a pitched battle with the Dodgers for the division lead. The Warriors haven’t had a chance to swoon in June for 40 years, but here they are in the NBA Finals for the first time since the 1975 season. I like the Bay Area in June, how about you? The A’s, you ask … well they already swooned in April and May, so who knows, maybe they’ll join the June Boom before the month runs out. The Giants and Warriors have more in common than just the fact they are playing very meaningful games this month. I see a lot of the 2010 Giants in the Warriors. You’ve got the igniter in young star Stephen Curry for the Warriors, similar to what Buster Posey was to the Giants in 2010. None of the players on either of these teams were even born the last time their franchises won a championship. Another similarity is how fans who largely ignored both teams jumped on the bandwagon as soon as it became evident that those bandwagons were headed for the promised land.

I have been a longtime Giants fan through thick, thin, and starvation, but I admit I am among those who have hitched a ride with the Warriors’ this season. But where I differ from those with the brand new Warriors jerseys and caps is that I was there at the start. I was an immediate huge Warriors’ fan as a kid when they arrived in San Francisco from Philadelphia in 1962. I’d read about the exploits of Wilt “The Stilt” Chamberlain in a book I had of great sports moments, and I knew that he once scored 100 points in one game. I couldn’t wait to see him, and never took my eyes off him when I got to go see the team play at the Cow Palace in Daly City. I loved those early Warriors’ teams. Wilt averaged 44.8 points per game that first year, and his supporting cast of nifty guards Guy Rodgers (825 assists) and Al Attles and rugged rebounder Tom Meschery. In the 1963-64 season, the Warriors reached the finals against the legendary Boston Celtics. Say what you want about Lebron James vs. Steph Curry. Chamberlain vs. Celtics center Bill Russell always will be to me the greatest one-on-one matchup in NBA history. The Warriors lost that series, as well as the finals against the Wilt-led 76ers in 1966-77, but they remained a mostly competitive team through 1974-75, when they won the title.

Now I’m back, and who wouldn’t be? If the 49ers want their motto to be win with class, they should be watching the Warriors. They earn millions, but they play as if they are trying to survive paycheck to paycheck. Curry seems too good to be true. We have to be careful when we start going overboard about praising an athlete as a person, since we really don’t know them, but Curry seems genuine. He might be the best shooter ever, although I remember watching Lakers’ star Jerry West in his prime. Rick Barry, who led the Warriors to their 1974-75 championship, still might be the greatest San Francisco-Oakland Warrior ever. Barry averaged 25.6 points as a Warrior to Curry’s 20.9, shot 44% in two-point field goals to Curry’s 49%, and made 89% of free throws to Curry’s 90%. The unknown is what Barry might have done if the three-point shot was in effect in his era. Barry scored 64 points in a game in 1974. If the threes were good then, how high might he have gone?

LIFE OF RILEY: A national debate broke out over whether Curry should have allowed his precocious and entertaining 2-year-old daughter Riley to take over a post-game news conference. Riley’s actions were a distraction, but I’ve rarely seen athletes provide any revealing tidbits about the game in those interviews anyway. So the question is, should Riley be booted? For the answer, I go to studio head Darryl Zanuck, who faced demands from the cast of “The Sun Also Rises” in 1957 to eject young male star Robert Evans. Replied Zanuck in his famous line: “The kid stays in the picture.” My suggestion: that Curry hire J.T. Snow as Riley’s bodyguard. I could see LeBron fiercely driving for a thundering dunk over Curry just as Riley breaks free and runs onto the court. J.T.’s save of three-year-old batboy Darren Baker, Dusty’s son, from a home plate collision in the 2002 World Series, makes him the best qualified to keep Riley from harm.

PRESIDENTIAL VISIT: With their June 4 third ceremonial trip in five years, the Giants have now officially visited the White House more in that period than the Republican leadership. Barack Obama has been the perfect host, since he is a big sports fan. I’ve looked over the list of the potential next occupants of the White House and am concerned. Assuming the Giants continue the trend of odd year crowns, their next scheduled D.C. visit will be June of 2017.

There’s not a whole lot of baseball people seeking to be commissioner in chief. The Cub-cap clad Democrat Hillary Clinton threw out the opening day first pitch at Wrigley Field as first lady in 1994, but her team lost the game and a few months later, baseball went on strike and the season was ruined. Not a good sign. Also, beware of a Hillary flip-flop on which team she really supports. As a seven-year-old, she went out on Halloween dressed as Yankees’ great Mickey Mantle.

On the Republican side, Mike Huckabee seems to be already warming up for a baseball ceremony, as he borrows from the game’s lingo. Huckabee, while scolding fellow contender Rand Paul for not wanting to answer tough questions, said, This is the big leagues … you’re going to have to expect you’re going to have a lot of fastballs aimed at your nose.”

I dunno. Maybe the Giants better win it in this even year, and get Obama one more time before the baseball imposters settle into the Oval Office.

YELLOW MELLOW: A USA Today columnist set off a firestorm by ripping Warriors’ fans who feel obliged to don the yellow shirts fixed to their chairs at Oracle. I’m not passionate about this, but I’m leaning in the columnist’s direction. When I go to a game, I wear what I wish. If I want to wear an orange shirt to the Giants game, great. If I choose to wear a green shirt, so be it. The word is fans at Oracle have no choice: they are the enemy if they don’t do the zombie-like thing and don their yellow. This is far different from AT&T, where they hand out rally towels for post-season games, but no one yells at you if you don’t wave it. Giants win on this one.

MILD MILESTONES: Unless you’re a Yankees’ fan, Alex Rodriguez’s quest for milestone numbers is a non-event. Arod passed Barry Bonds to be second on the official RBI list behind Hank Aaron, and no one cared. His next target is 3,000 hits. He recently passed Willie Mays for fourth on the all-time home run list. To his credit, he humbly said, in effect, that he is no Willie Mays after that milestone was achieved. Arod’s link to performance-enhancing drugs and his handling of the matter have ruined what otherwise would be a celebration of the great game. Instead, every milestone further tarnishes the sport that has made him so wealthy. He should have quit while he was behind.

PIE IN THE FACE: One of the most juvenile moments in baseball is the ritual among many teams where players slam a shaving cream pie or pour chocolate on the game’s hero during the post-game interview. The Giants don’t seem to participate in this silly practice, but as I watched game hero Nori Aoki interviewed recently through his interpreter, I wondered if the interpreter would get the pie too if this was one of those teams.

By joekonte in Uncategorized on June 7, 2015.
← Lon Simmons: A broadcast legend Bochy’s snub of Kershaw heats up rivalry →