Home » Uncategorized » Are You Ready For Some Giants Baseball?

Are You Ready For Some Giants Baseball? 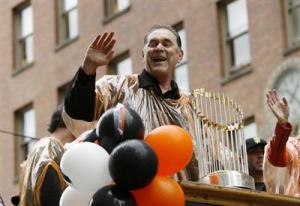 With another Super Bowl in the books, the nation can now turn its attention to the investigation into  Deflate-gate and why Marshawn Lynch wasn’t given the ball at the one yard line. But not me. Pitchers and catchers report to the Giants camp in just 18 days, and before you know it, the whole squad will be there.

So before then, here are a few random thoughts about the Giants and the season ahead.

WELCOME MATT: As the Winter Meetings got underway, Giants fans fantasized about which free agent pitcher the club would add to the rotation to offset concerns about every potential starter except for Madison Bumgarner. As Spring Training nears, however, the Giants appear ready to open the season with the same crew. That has left fans fantasizing about Matt Cain, who was Bumgarner-like before ailments dramatically affected his performance and eventually sidelined him for removal of bone chips in his elbow, and a bone spur in his ankle. How good was the pre-breakdown Cain? He threw 200-plus innings six straight years, he posted ERAs under 3.00 two years and he went 4-2 with a 2.10 ERA in 51 innings in post-season play. In the World Series, his ERA is 1.84 in 14.2 innings. Sound familiar, MadBum fans?  If Cain — signed through 2017 — can get even close to those numbers, the Giants would have one of the best one-two starter combinations in the league. So barring some other acquisition, Cain might be the key to 2015. Without a strong Cain comeback, it’s difficult to imagine the Giants can survive with the Peavy-Hudson-Lincecum-Vogelsong foursome.

PROSPECTS POISED: One reason why the Giants might not have pulled the trigger on a big-money pitcher is that they have some young arms in the minors who are getting near showtime. It’s possible that at some time this season fans will get a look at pitchers who the club would like to see become integral parts of the 2016 staff. These include right-handers Kyle Crick and Chris Stratton, and left-handers Ty Black, Clayton Blackburn and Steve Okert. The other reason is that the class of 2016 potential free-agent pitchers looks promising. Even if Cain does return to form, the Giants might be needing to fill three spots in the rotation next year.

PLAY BALL: The NL West looks like it could be more competitive this year. The Giants should get a quick early test as all 23 games in April are against division foes. Six of those dates are against the Dodgers. One hopes that the rotations fall so that we can have two Bumgarner-Clayton Kershaw matchups. The biggest challenge of the schedule for the Giants will come in a period from July 31 through Sept. 9 when they will be on the road longer than Lewis and Clark. They play a stretch where 27 of 39 games will be away. If they survive that grind, the Giants will only need suitcases for one three-game trip to San Diego from Sept. 11 through the final game of the season Oct. 3. Their only other “road” series during that time is in Oakland.

HERO RETURNS: Mark down the May 7-10 series against the Marlins, since it should involve the appearance of Michael Morse. Morse’s enthusiasm and his  game-tying homer against the Cardinals in Game 5 of the NLCS made him a fan favorite, and he should receive a thunderous welcome at AT&T. Morse’s departure was mutual, because first base is his only real position  these days and the Giants are packed there. A suggestion: present Morse his ring in a pre-game home plate ceremony, and show the blast one more time on the scoreboard. It would be a magic moment. This gets me to thinking how Giants fans would react if the Boston Red Sox and Pablo Sandoval were playing at AT&T this year. Sandoval’s departure was messy. The Giants offered what turned out to be an extremely low-priced contract that apparently offended him, and Sandoval later said that he left money on the table because he wanted to go elsewhere. The Panda hat stuff doesn’t seem as cute as it once did. So Giants fans, if Sandoval was playing at AT&T this year, and came up to bat for the first time, would you boo or cheer? The Giants will probably get a ring to Sandoval when the Red Sox visit Oakland. Or maybe Pablo can send Brian Wilson to the ballpark as a courier to get his ring from Larry Baer. It’s not like Brian is real busy right now.

DYNASTY DEBATE: My case in an earlier post that the Giants’ incredible run of three World Series championships wasn’t a dynasty stirred some lively response. The best was from a fellow who inquired, “Are you a Dodger fan?” I’m not looking to revive the debate, but the Giants won just 88 games last year, and only qualified for the post season because of the wild-card format. In World Series history, only five teams with 88 or fewer wins have won the championship with the exception of the strike-shortened 1981 season and the World War I abbreviated 1918 season. The Giants won 88 or more games from 1962 through 1969, but only got to the post season once. Imagine if they had a wild card opportunity. The Giants of that era, with all that power and a Juan Marichal-led pitching staff would have gotten enough cracks at post season to have been considered a dynasty. But while the Giants might not have looked like a dynasty team in the 2014 regular season, they match up with legendary dynasty teams with their incredible post-season performances. The Yankees won the World Series five straight years from 1949-1954, winning at a 70% clip with a dominating 20-8 record. The 2010-2012-2014 Giants won at the same impressive rate in post season with a 34-14 mark. So while the dynasty debate is an entertaining exercise, there is no question that the Giants are one of the best ever post-season powerhouses.

BATTING ORDER: My 2015 Giants opening day batting order. Aoki, Panik, Pagan, Posey, Pence, Belt, McGehee, Crawford. This probably differs from manager Bruce Bochy’s lineup card in one significant way — he would keep Pagan in the leadoff spot and have Aoki hit seventh. My order puts speed at the top for the big run producers. The Giants only have three power hitters, and this puts them in the middle of the lineup. If you put the Posey-Pence-Belt trio in the three-four-five spots, the lineup will be void of any real scary power threats from sixth through ninth. Now, Bochy has a better shot at the Hall of Fame than I do, but Bruce, this is really the way to go!

FAME IS FLEETING: Former sparring partners Barry Bonds and Jeff Kent are getting no closer to a place in the Hall of Fame based on recent voting. Having a baseball shrine that doesn’t include the home run king and the all-time second baseman home run leader is hard to comprehend. I’ll accept the writers’ opposition to Bonds, though I disagree with them. But I won’t accept the failure to honor Kent. He could have been a star in any era. He played the game hard and with immense talent. Vote him in.

HALL OF FAME OPTION: I’m sure one of the reasons tainted stars like Bonds, Mark McGwire, Roger Clemens and Pete Rose might never get in is that MLB doesn’t want to celebrate them with a big ceremony and speeches. So here is an idea: Put them in because the Hall seems statistically tainted without them, but don’t have a ceremony. Just hang their plaques up in the appropriate wing after closing hours with no fanfare. The big names are in, and baseball survives.

DODGERS UPDATE: The Giants have hardly done anything this winter while the Dodgers had a Hollywood makeover on the field and in the front office. Still, I’m not sure if the Dodgers are any better. They won 94 games last year, and could repeat that as long as they have their Big Three starters and a dominant closer. But have they taken the steps to get deep into the post-season? One of the keys to that — reliable middle relief and a shutdown set-up corps — is still not resolved. Another curious move: A mix of speed and power is a nice combination, but the Dodgers moved out fleet-footed Dee Gordon and slugger Matt Kemp. Maybe the biggest key for the Dodgers will be minor league sensation Doc Pederson, who could step into Kemp’s shoes in center field. Pederson has hit 73 homers and drove in 206 in the last three years, and batted .302 over the last five years in the minors.

MR. CUB, RIP: I don’t recall seeing the Cubs play the Giants at Seals Stadium in my first two years of watching baseball as a kid. But I knew all about their superstar shortstop Ernie Banks. A prized bubblegum baseball card of mine at the time was a Banks one produced by Sport Magazine in 1958. On the back, it noted that Banks hit a record five grand slams in 1955, and added, “When he comes to bat with the sacks loaded, pitchers shudder.”

I looked forward to seeing Banks for the first time when my Dad took me to Candlestick Park on April 14, 1960. We were sitting in the lower reserve on the third base side and watched as Banks came to the plate with two out and the bases filled in the third inning. Banks turned those powerful hands on a pitch from Jack Sanford and I watched as the ball rocketed off his bat and easily cleared the left field fence. The Giants lost that game, but it was OK. I went to the game that night excited about seeing the great Ernie Banks, and he delivered greatness. They called him Mr. Cub because he played his entire career with the team. But his legend had a far greater impact on the game than just one team. So thanks for the memories, Mr. Baseball.

IN SABES WE TRUST: What a difference three championships in five years can make. Giants GM Brian Sabean was the target of bitter criticism on sports talk radio in the frustrating post-Bonds era. Today, those questioning the Giants’ quiet winter do so while usually expressing patience and the belief that Sabean and crew will address all the needs. Not so in Dodgerville. An article on MLB.com about the Dodgers new front office wanting to change the organization’s culture and stressing reliability and communication and such was met with a resounding thud in the fan comments section that followed. The questions surrounding both teams should make for an interesting spring, so lets get those pitchers and catchers to camp and get started. Only 78 days until Giants and Dodgers meet.

By joekonte in Uncategorized on February 2, 2015.
← 1958 Giants Will Live Forever The Big Rush To Speed Up Baseball →