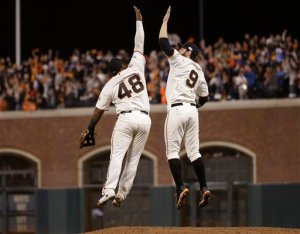 Coming from Kansas City, the Royals can’t be expected to know about the oceanic phenomenon known as killer waves. So you can’t blame them for figuring it looked like smooth sailing after they posted a four spot in the third inning to take a 4-1 lead in Game 4 of the World Series. If they could tread water for just four more innings, skipper Ned Yost could turn over command of the final three innings to his brilliant crew of relievers.

The first sign of a killer wave begins building far out at sea, and can go undetected. So the Royals saw little danger ahead when the Giants answered in their half of the third with a run-scoring single by Buster Posey to make it 4-2. Those far-out rogue waves aren’t the biggest ones, but my quick Wikipedia research found that “strong currents cause waves to merge to create  exceptionally large waves.”  So the Royals again did not see any reason to go for the lifeboats when the Giants drew even with them in the fifth at 4-4, still drifting along with the comfort of their shutdown bullpen ready to take the oars. Then, without warning, the rogue waves struck.

A two-run double by Pablo Sandoval and RBI-single by Brandon Belt in the sixth suddenly made it 7-4. In the seventh, Gregor Blanco put down a bunt that pitcher Tim Collins threw away, allowing Brandon Crawford to score. Joe Panik delivered a two-run double and Hunter Pence came through with  an RBI double. It all happened so fast the Royals never had a chance to call the Coast Guard. The Giants sent 17 men to the plate in the sixth and seven innings, and the Royals ended up on the ocean floor as the Giants triumphed 11-4 to even the Series at 2-2.

Not a factor: The Royals’ one-two-three punch bullpen never got a chance in this one. The impressive trio of Kelvin Herrera, Wade Davis and Greg Holland are known in Kansas City as simply HDH. But unfortunately for the Royals, the five pitchers who surrendered 11 runs in Game 4 will forever be known as TNT, as the Royals staff imploded.

Team effort: The cliché came true for the Giants in Game 4. Eleven different Giants had hits. The top three batters in the order — Blanco, Panik and Posey — went 5-for-12 with three RBI, three walks and six runs. Panik had two doubles. But what might be more impressive was his sacrifice bunt in the sixth that set the stage for that big inning. How many veterans have you seen who looked like they didn’t even know how to bunt? Panik is a rookie with just months of experience, but he is already placing himself into Giants lore.

MVP: Pence did nothing to lose any votes as a possible MVP Series winner. Pence went 3-for-5 with three RBI, is hitting .467, and made a web-gem catch in right field. A strong outing by Madison Bumgarner in Game 5 will make the two of them leading candidates.

Secret weapon: How many teams have a legitimate big-time starting pitcher sitting around to bring order to a chaotic scene should the starting pitcher falter? Yusmeiro Petit did it again in Game 4 after Ryan Vogelsong’s early exit. Petit, after three scoreless innings, has now gone 12 post-season innings without allowing a run. He creates a whole different option for manager Bruce Bochy. The Giants manager can stick with the uncertain Jake Peavy as his Game 6 starter in Kansas City with the comfort that Petit can douse the flames if the fiery Peavy burns out early. It seems unlikely Bochy will change the rotation at this point, meaning Peavy in Game 6 and Tim Hudson in Game 7 if that is needed. It will be interesting to monitor Madison Bumgarner’s performance in Game 5. If he has a stress-free game, and comes out after around seven innings with the Giants in control, he could become a big factor in relief in Game 7.

Mirror, mirror on the wall: Who has the finest bullpen of them all? While HGH gets all the publicity for their dominance, the Giants are going for their third World Series in five years because of stifling bullpens of their own. The Giants relievers threw 6-1/3 innings of scoreless ball in Game 4. I knew Bochy would get hard-throwing and hard-hit Hunter Strickland back in a game, having him mop up with the Giants in control in the ninth. Bochy still sees value in Strickland getting a right-hander or two out in a key situation during the Series, and is determined to keep his confidence up. This might be the beauty of Bochy. Meanwhile, Tim Lincecum warms up and doesn’t get in. Crazy thought, but can you just imagine the maligned Strickland and the ignored Lincecum having some key role in a Giants World Series clincher? I wouldn’t count it out.

Water torture: I wrote in jest after Game 2 that the Giants might over-water the infield at AT&T Park in Game 3 to slow down the Royals running game. I cited the shenanigans by the Giants ground crew in the 1962 pennant race with the speedy Dodgers, in which the area around first base was turned into a swamp as the hose was aimed at the first base bag as if it was on fire. It got so bad that the umpires ordered the grounds crew back onto the field to soak up the moisture with sand. After Game 3, I couldn’t help but laugh when the Royals complained that the infield seemed to be over watered. “I thought it was a little bit wet around first,” said Royals manager Yost. The Royals have stolen only one base in this series, so they are clearly not having any joy in mudville.