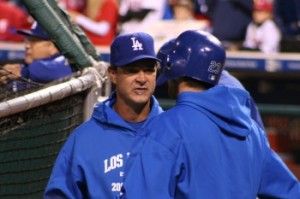 The Dodgers’ victory over Philadelphia Aug. 17 put them in pretty fast baseball company. The club tied the 1941 New York Yankees and 1942 St. Louis Cardinals for the best 50-game stretch since 1900 with a 42-8 mark. The 1951 New York Giants have to be part of the equation, having won 39 of their last 47 games. Interestingly, the Dodgers succumbed to all three teams. The Cardinals trailed the Dodgers by 10 games on Aug. 5. The 50-game tear began Aug. 9, allowing the Cardinals to edge the Dodgers for the pennant with a 106-48 record. St. Louis, an aggressive base-running team which led the league in runs, doubles and triples, also relied on dominant pitching as it allowed just 29 runs in the last 17 games of the season. The Cardinals defeated the Yankees in five games to win the World Series.

The 1941 Yankees were in fourth place, 3.5 games behind with a 25-22 record June 25. New York then went on its 42-8 streak, taking over first place for good June 29. The Yankees downed Brooklyn 4-1 to take the World Series.
The 1951 Giants, trailing the first-place Dodgers by 13.5 games on Aug. 11, finished out the season with a 39-8 mark, which included winning two of three in a playoff against the Dodgers to win the pennant. Unlike the 1942 Cardinals and 1941 Yankees, the 1951 Giants were unable to take the momentum from their incredible streak and turn it into World Series glory as they fell to the Yankees in six games.
What all this means to the 2013 Dodgers is still to be determined. But if the Dodgers were to finally cool off after their blistering second-half pace, would they have trouble recapturing the momentum of their impressive streak? The Dodgers look like potential champs now, but Don Mattingly might still have more work to do to keep the apparent juggernaut moving once post season rolls around.
Advertisement